You are here: Home / Business / Hawley to YouTube: Stop recommending videos of kids to pedophiles

U.S. Senator Josh Hawley, R-Missouri, says video-hosting website YouTube refuses to stop automatically recommending footage of kids to pedophiles. He wants to require such companies to change their algorithms for videos of children or face fines and prison time. Hawley’s legislation follows The New York Times reporting that YouTube’s algorithm is designed to suggest videos of children to pedophiles. 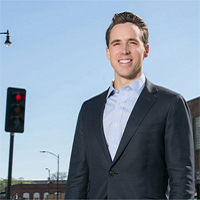 “This report was sickening, but I think what was even more sickening was YouTube’s refusal to do anything about it,” he says. “YouTube admitted that they could do something about it, they could stop auto-referring these videos of minors to pedophiles, but they chose not to do so.

“Their model is that 70 percent of their traffic comes from these auto-recommended videos. In other words, there is ad revenue that would be lost if they actually took some enforcement steps here, took some steps to stop this exploitation of children,” says Hawley.

YouTube says it has banned younger kids from live streaming unless they are clearly accompanied by an adult and has disabled comments on videos with children. The company says it has strongly enforced its policies on children’s content and removed more than 800,000 videos in the first quarter of 2019 for violating those policies.