You are here: Home / News / Missouri Congressman says Trump has forced other countries to respect us again

President Donald Trump has gone where no American president has gone before – North Korea. The outcome remains to be seen of Trump’s visit about one week ago with the Asian country’s leader, Kim Jong Un. East-Central Missouri Congressman Blaine Luetkemeyer, a strong Republican ally of the president’s, tells Missourinet affiliate KWOS in Jefferson City that Trump is a “master at keeping the dialogue moving.” 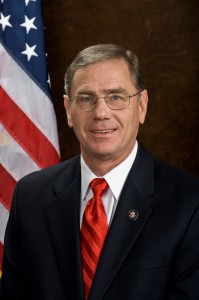 “President Trump is not a nation-builder,” says Luetkemeyer. “He’d rather leave the despots, as bad as they are, in place and deal with them. It’s better you know the enemy that you know, I guess.”

Luetkemeyer says Trump has forced other countries to respect us again.

“They don’t have to like us, but at the end of the day, they have to respect us. By doing that, we become a leader. When we can lead the rest of the world, we can lead them to peace,” he says. “He’s willing to go a diplomatic route and if you cross him too much, it’s time to do the carpet bombing. It’s either one way or the other. There’s none of this grey area about ‘Well, we’re going to hold hands for a while and see if everything works out.’”

In 2017, Trump referred to Kim Jong Un as rocket man for shooting off test missiles.

Critics call the meeting nothing but a photo opportunity and have bashed Trump for being so friendly with the dictator.