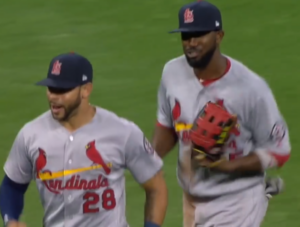 Tommy Edman’s three-run homer highlighted a five-run ninth inning as the Cardinals rallied to beat the Mariners 5-2 in Seattle.

Dexter Fowler and Yadier Molina also drove in runs in the frame. Adam Wainwright tossed five innings of two-run ball for St. Louis, which won for just the second time in eight games.

Michael Wacha [[ WAH-kuh ]] takes the mounds for the Cards in the series finale today.

The Royals managed just five hits in a 4-0 loss to the Indians at Kauffman Stadium.

Danny Duffy pitched into the seventh, allowing two runs on five hits and five walks to take the loss.

Whit Merrifield and Alex Gordon each had two hits in defeat.

Kansas City lost for the sixth time in seven games to drop to 29-and-58, the second worst record in the majors.