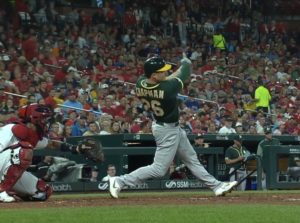 (St. Louis, MO) — Daniel Mengden and three relievers combined on a five-hitter as the A’s shut out the Cardinals 2-0 in St. Louis. Mengden scattered four hits and a walk over six innings for the win. Liam Hendricks worked the ninth for his second save. Beau Taylor and Matt Chapman clubbed solo homers to provide the offense for Oakland, which has won seven-of-nine. Adam Wainwright struck out nine over six-and-two-thirds innings, but gave up both homers to take the tough-luck loss. Tommy Edman had two of the five hits for the Cardinals, who are on a three-game slide.

>>Braves Hang On To Beat Cubs

(Chicago, IL) — Nick Markakis hit a three-run homer in the third inning as the Braves beat the Cubs 5-3 at Wrigley Field. Dallas Keuchel allowed eight hits and three runs over five-and-two-thirds innings, split up by a 48-minute rain delay. He induced 11 ground ball outs in the win, including three inning-ending double plays. Brian McCann hit a solo homer in the second for Atlanta, which has won four of its last five. Willson Contreras and Kris Bryant hit towering homers for Chicago, which couldn’t overcame an early 5-0 deficit. Yu Darvish took the loss.

(Milwaukee, WI) — The Mariners jumped out to a 3-0 lead in the second inning on their way to a 4-2 win over the Brewers in Milwaukee. Wade LeBlanc struck out six over five innings of two-run relief to get the win. Roenis Elias recorded his 10th save for the M’s, who have won three in-a-row and six of their last seven games. J.P. Crawford went 3-for-5 with three RBI for Seattle. Adrian Houser started and lost for Milwaukee. Mike Moustakas and Ben Gamel hit solo homers for the Brewers, who have lost seven of their last nine games.

(Cleveland, OH) — Jake Bauers and Tyler Naquin both homered in the fourth inning as the Indians went on to beat the Royals 5-3 in the rubber match of a three-game set in Cleveland. Jason Kipnis, Oscar Mercado and Jordan Luplow also plated runs for the Tribe, which led 4-0 after four. Trevor Bauer struck out 12 while pitching one-run ball into seventh inning for the win. He evened his record at 6-and-6. Jakob Junis was tagged for four runs in six frames as he fell to 4-and-7 for KC. Lucas Duda homered during a two-run ninth for the Royals, who have dropped four-of-six.

(Minneapolis, MN) — Nelson Cruz’s bases-clearing double in the seventh inning was the difference as the Twins rallied past the Rays 6-4 in Minneapolis. Eddie Rosario singled in a run and scored on a wild pitch in the first inning, but left the game with a sprained ankle. Trevor May got the victory for Minnesota, which has won four-of-five. Tommy Pham, Kevin Kiermaier and Willy Adames homered for Tampa Bay. Starter Charlie Morton took the loss for the Rays, who have dropped seven of their last nine.