(NASCAR)—Martin Truex, Jr., has held off teammate Kyle Busch for the last fifteen laps to win his second straight race on the road course at Sonoma, his fourth win of the year in NASCAR’s top series. Busch was able to close the gap on Truex on several corners but Truex was able to get a better drive-off coming out. He won by 1.9 seconds.

Clint Bowyer spent most of the race flirting with a top ten before pole-starter Kyle Larson got past in in the closing laps. Bowyer finished eleventh, 1.1 seconds behind Larson. He’s twelfth in the overall points with ten races left before the 16-driver playoff field is set.

(IndyCar)—Alexander Rossi’s win at Road America in Wisconsin was the most dominating IndyCar victory in a decade. 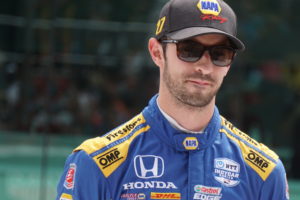 Rossi led every lap but one and beat Will Power to the checkered flag by 28.491 seconds.   It’s the widest victory margin in IndyCar since Scott Dixon won at Mid-Ohio in 2009 by 29.780 seconds. His victory margin was so large that Power said he didn’t see Rossi for most of the race.

It is Rossi’s second win of the season, the fifth time in the last seven races that he has finished first or second. He has closed to within seven points of Josef Newgarden’s lead in the points standings. Newgarden was third at Road America.

Ryan Hunter Reay finished fourth. Dixon, the defending series champion, spun out on the first lap and restarted 23rd. He fought back to fifth at the end. 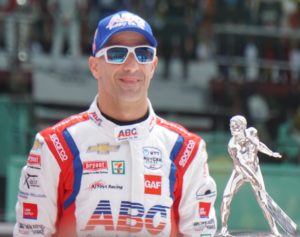 The race was a milestone for Tony Kanaan, who made his 370th career start, moving him past his boss, A. J. Foyt, on the list. Only Mario Andretti, with 407 starts, is ahead of Kanaan on the list. Kanaan has 17 series wins, including the 2013 Indianapolis 500. He won the series championship in 2004.

Indycar is off next weekend before racing in the streets of Toronto on July 14.

(FORMULA 1)—Another Grand Prix. Another win by Lewis Hamilton. This one was in France.   It’s his sixth win in eight races this year, the eighth straight for Mercedes and the sixth time the team has finished 1-2. And Hamilton sympathizes with fans who are losing interest in the sport. “When you say, ‘It’s boring’—I totally understand it but don’t point fingers at the drivers because we don’t write the rules.”

Hamilton went to a meeting in Paris last week with the teams and the FIA, the sanctioning body for the sport, to offer his opinions on needed changes. “I have confidence it’s going to get better,” he told reporters. But he didn’t go so far as to say there would be massive changes. “They’re making all these decisions but never once had a driver’s input…”

Hamilton started from the pole on the Circuit Paul Ricard and led all the way, finishing 18 seconds ahead of teammate Valttteri Bottas. Charles LeClerc was third in a Ferrari.

The Grand Prix of Austria is next week.