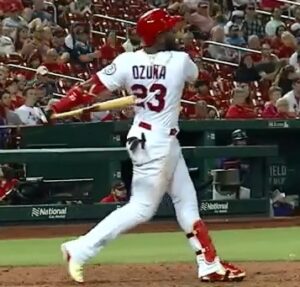 Marcel Ozuna went 3-for-4 with a homer, three RBI and two runs scored as the Cardinals topped the Angels 5-1 in St. Louis.

Michael Wacha picked up the win, his fifth, giving up one run on five hits over six innings.

Jose Martinez and Kolten Wong each had run-scoring singles in the seventh.

The Cards have won four of their last six games. Justin Upton drove in the only run for the Angels on a double in the first.

Albert Pujols, playing his first game in St. Louis since leaving as a free agent in 2011, went 1-for-2, before being lifted for a pinch runner.

Griffin Canning gave up just two earned on four hits in five and a third, but was saddled with his fourth loss of the season. The Halos have dropped two-straight.