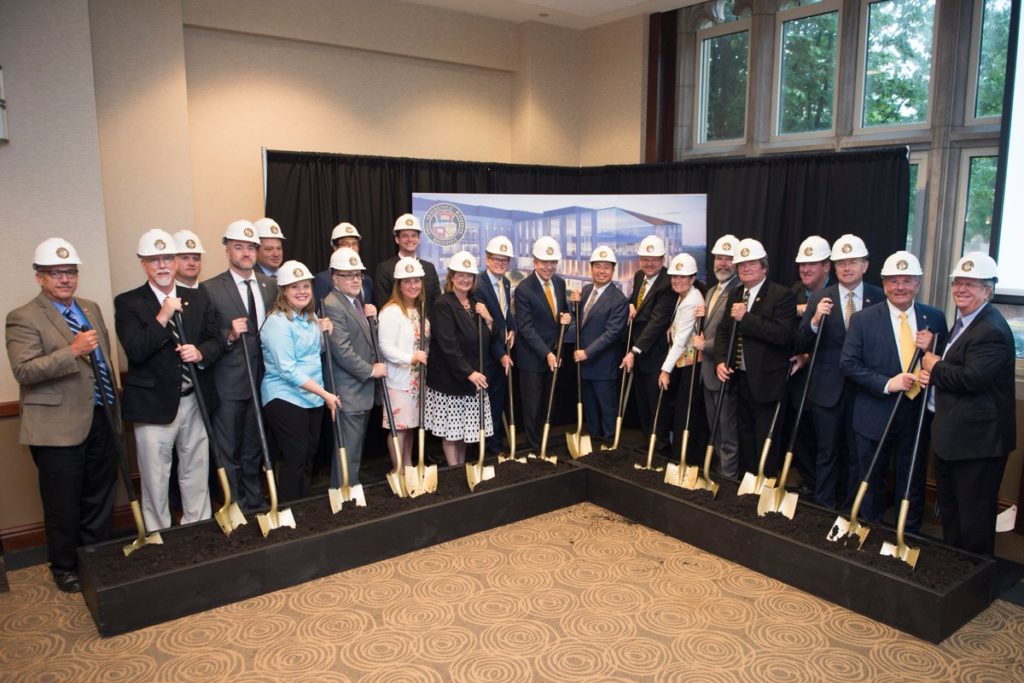 Today the University of Missouri System symbolically broke ground on a $220 million construction project to be called “NextGen Precision Medical Institute.” This collaboration center is designed to tap into research at all campuses to study and treat diseases quickly–and share those findings with colleagues and companies.

University of Missouri Chancellor Alexander Cartwright describes the project as a “world-class teaching and research facility that is worthy of MU. Our flagship, land grant mission will now have the resources that match anywhere in the world.”

That’s a large concept that, in fact, relies on a precise and often personal approach to treating patients. According to the National Institutes of Health, precision medicine is “an emerging approach for disease treatment and prevention that takes into account individual variability in genes, environment, and lifestyle for each person.”

Missouri U.S. Senator Roy Blunt, chair of the Senate committee that oversees health, education and labor, is an outspoken supporter of federal NIH funding. He says the center will study Alzheimer’s and dementia, is the most expensive diseases for American taxpayers and patient families.

“The taxpayer cost is about $265 billion, that’s very close to half of the entire defense budget,” Blunt told Friday’s gathering. “And if something doesn’t change, we’d be by 2050 — just with Alzheimer’s and dementia — at twice today’s defense budget, looking at $1.2 trillion.”

According to the school, the approximately 265,000-square-foot, five-story facility will provide space for more than 60 principal investigators, about half of whom will be newly recruited in areas such as engineering, medicine, veterinary medicine, animal sciences, and arts and science. It will be located on the MU campus near University Hospital at the northwest corner of Hospital Drive and Virginia Avenue.

The state legislature allocated $10 million for the construction; the rest will come from the Veterans Administration, federal grants and private funding.

The university health system’s relationship with the nearby Truman VA hospital will be another source of growth. President Choi says, “The VA hospital that allows our researchers at both Missouri S&T as well as MU to work with medical doctors and explosives experts to understand concussion, PTSD as well as traumatic brain injuries–these are topics that are top of mind for citizens and veterans in this state.”

Cartwright listed the unique assets of the Columbia campus as well as special studies at its three other state campuses, including the most powerful university research reactor in the U.S.

At Missouri S&T, a researcher is treating cancer at the nanoparticle level; at UMKC, bio-informatics and big data target rare diseases; at UMSL, neurological research studies effects of disease on the brain and mental health; at UM-Columbia, genomic research in other species helps decode diseases in humans.

“For this space, every day will be a beginning. Every day will bring with it the opportunity to identify new treatments for cancer, neurological disorders and vascular diseases and to use precision medicine to deliver world-class healthcare right here at home,” she said.