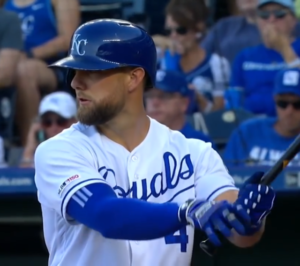 (Kansas City, MO)  —  Glenn Sparkman allowed one run and five hits over seven innings to pitch the Royals to a 4-1 win over the Twins in Kansas City.  Alex Gordon doubled in two runs in the KC three-run first inning.  Ian Kennedy closed it out with his ninth save.  The Royals won for the fourth time in their last five games.  Jake Odorizzi took the loss, yielding four runs on eight hits over four innings. Jorge Polanco homered in the first inning in defeat.  Minnesota has lost four of five.

(St. Louis, MO) — JT Riddle hit a two-run homer in 11th to help the Marlins beat the Cardinals 7-6 in St. Louis. Brian Anderson went 2-for-4 with a homer and two RBI and Miguel Rojas went 2-for-5 with an RBI. Jarlin Garcia picked up the win in relief and Sergio Romo picked up his 13th save. Miami has won two-of-three. Tommy Edman hit his first career homer in the eighth to tie the game. Andrew Miller gave up two runs on one hit, a walk, and a homer, to take the loss. St. Louis has lost two-of-three.

Edman talks about his first homer.

(Chicago, IL) — The Cubs scored six runs in the third inning to cruise to a 7-4 win over the Mets at Wrigley Field. Kris Bryant and Anthony Rizzo each drove in a pair of runs in the inning. Javy Baez went deep in the seventh for Chicago. Adbert Alzolay got the win in his debut for the Cubs, who have won two straight. Pete Alonso and Todd Frazier homered for the Mets in defeat. Walker Lockett gave up six runs over two and one third innings and took the loss for the Mets, who have dropped six of their last eight.

(Milwaukee, WI) — Jose Iglesias and Nick Senzel both smacked two-run homers as the Reds roughed up the Brewers 7-1 in Milwaukee. Iglesias drove in four and Senzel plated three for Cincinnati, which won its fifth straight. Tanner Roark tossed six innings of one-run ball for the victory. Christian Yelich hit his league-leading 28th home run for the Crew, who have dropped four in-a-row. Jimmy Nelson fell to 0-and-2 with the loss.

(Arlington, TX) — Mike Minor allowed one run and three hits over eight innings as the Rangers topped the Indians 4-2 in Arlington. Elvis Andrus homered, tripled, drove in two runs and scored twice in the win. Andrus and Danny Santana went yard back-to-back in the eighth inning. Texas earned a split in the four-game series. Shane Bieber absorbed the loss, allowing two runs on five hits, while striking out eight and walking none in six innings. Carlos Santana homered for Cleveland, which concluded a 5-and-2 trip.