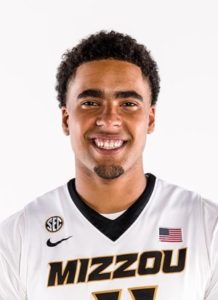 Missouri’s Jontay Porter, who missed his entire sophomore basketball season but declared his eligibility for the NBA Draft, went unpicked despite what many of the draft experts believed would be a second round selection.  The 7-foot forward still has options, but one of those does not include a return to Mizzou.

Porter could still be signed as a free agent for the NBA, he could play in the G-League or choose to go overseas.  The question that remains is whether or not that will happen this season or next.  Porter missed all of last season after tearing the right ACL and MCL in October and then re-injured his knee when he played in a pick-up game with his brother Michael in Denver.  Jontay played that game before he was cleared by doctors.

As a freshman at Mizzou, Porter averaged 9.9 points and 6.8 rebounds per game and was named the Southeastern Conference co-sixth man of the year. He entered the NBA Draft evaluation process but withdrew his name.  At the time he claimed he was told he could be a first-round pick, but elected to return to Mizzou for a second season.  Michael was chosen 14th overall in the draft two years ago and did not play in his first pro season as he rehabbed from back surgery.