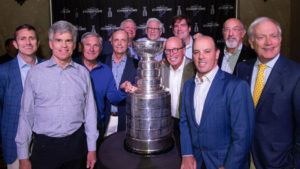 St. Louis Blues Chairman Tom Stillman’s all-local ownership group has acquired the minority interest in the Blues previously held by Sports Capital Holdings (St. Louis) LLC (“SCH”), the holding company of the previous Blues ownership group (which was in place from 2006 to 2012).  The purchase means Stillman’s group now owns 100 percent of the team.

“This is the best possible outcome for the St. Louis Blues, our city and community, and our supporters everywhere,” said Stillman. “Our all-local ownership group acquired the Blues in 2012 with two overriding goals: Win a Stanley Cup for St. Louis, and secure the long-term health of the franchise. Today the group made another major commitment, purchasing the only remaining outside interest in the team. All of our members will stay on board, maintaining the all-local makeup of the group. We commend the prior ownership group for its investment in the Blues and for working with us to complete this transaction.”