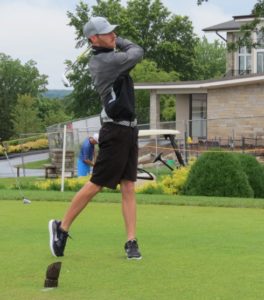 The second and final round of stroke play for the 112th Missouri Amateur Championship wrapped up Wednesday at Hickory Hills Country Club with the back-to-back champion in top form looking for his third straight title. Brad Nurski’s 9-under 135 (64-71) tied the 36-hole scoring record held by Matt Bortis from the 2005 Missouri Amateur. This is Nurski’s second consecutive year as stroke play medalist.

Other low scores for the stroke play portion included a 140( 69-71) from Tommy Boone (Columbia), as well as a 140 (70-70) from Jack Parker (Columbia). Past Missouri Amateur Champion, Skip Berkmeyer (Town and Country), turned in a 141 (69-72). A total of fourteen players recorded a combined score of even par or better for the two days of stroke play.

At the conclusion of today’s play, the field was cut to the lowest 64 players. A tie for 64th place resulted in an eight-for-one play-off by those who scored a combined total of 153 strokes. Austin Gillund (Clinton) won the play-off and will compete against Nurski (St. Joseph) tomorrow morning at 8:00.

Thursday marks the first round of match play with the Round of 64. Tee times will begin at 8:00.