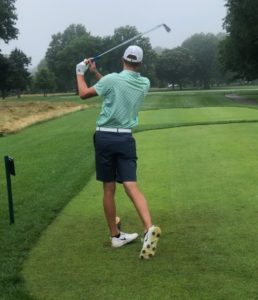 Back-to-back defending Amateur Champion, Brad Nurski (St. Joseph), turned in the low score of the day with a 64. Nurski’s card showed 8 birdies and 10 pars. His 8-under round ties a Missouri Amateur record for the lowest 18-hole score on Tuesday at the 112th Missouri Amateur Championship at Hickory Hills Country Club in Springfield, presented by the Missouri Golf Association.

Past Missouri Amateur Champion, Skip Berkmeyer (Town and Country), is currently tied for second with a 3- under score of 69 along with Tommy Boone (Columbia) and Kyle Long (Joplin).

The second and final round of stroke play begins Wednesday morning at 8:00 with the second wave teeing off at 12:30. Concluding play, the field will be cut to the lowest 64 players who will advance to match play. Any ties for 64th place will result in an immediate play-off.