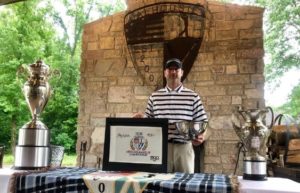 The Missouri Golf Association will host the 112th Missouri Amateur Championship at Hickory Hills Country Club, Springfield on June 18-23. This year’s field is made up of 147 players from across the state, all hoping to see their name engraved on the Amateur trophy among Missouri’s best players including Payne Stewart and Tom Watson.

Brad Nurski, of St. Joseph, is looking for his three-peat, coming off back-to-back first place finishes at the Missouri Amatuer.

“I always enjoy that week,” said Nurski.  “Anytime you get the chance to play for a state title it’s always fun. My first goal is playing well in stroke play, so I can move into match play, and not thinking about winning but just trying to play well.”

The first official day of play will begin on Tuesday with an 18-hole stroke play round. Wednesday will be the same format. After the first two rounds, the field will be cut down to the top 64 players and Thursday will mark the start of an 18-hole match play competition with the Round of 64. Two 18-hole rounds will be played on Friday in the morning Round of 32 and afternoon Round of 16. On Saturday, the remaining eight players will compete in the Quarterfinal and Semifinal round. Championship Sunday will consist of the final two players fighting for the title of Missouri Amateur Champion through 36-hole match play round.