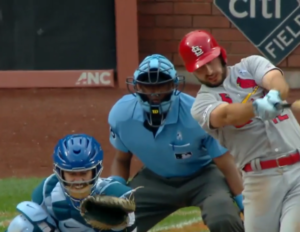 (Flushing, NY)  —  Paul DeJong drilled a go-ahead solo home run in the eighth inning to lift the Cardinals past the Mets 4-3 in New York.  Paul Goldschmidt hit a two-run homer in the first for St. Louis, which took three-of-four in the series.  DeJong now has nine home runs in 20 career games against the Mets and a 1.200 OPS — the highest OPS all-time vs. the Mets with a minimum of 80 plate appearances. At Citi Field alone, he has six home runs in 11 games.

Andrew Miller picked up the win and Carlos Martinez pitched the final two innings for his second save.  J.D. Davis, Adeiny Hechavarria and Juan Lagares plated runs for the Mets, who have dropped four of their last six.  Chris Flexen suffered the loss.  Starting pitcher Jason Vargas left in the fourth inning with a cramp in his left calf. 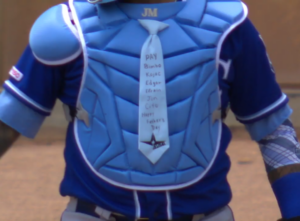 (Minneapolis, MN)  —  Jorge Bonifacio, Martin Maldonado and Billy Hamilton each drove in a pair of runs as the Royals held off the Twins 8-6 in Minneapolis.   Maldonado, who had three of the nine KC hits, wore a blue tie outside his chest protector with “Happy Father’s Day” inscribed on the bottom.

Jorge Lopez picked up the win in relief as the Royals avoided a sweep.  Max Kepler had four hits and two RBI for Minnesota.  Nelson Cruz homered and drove in three runs, while Miguel Sano had a solo shot in defeat.  The Twins lost for just the third time in 10 games.>>Brewers Take Down Giants

(San Francisco, CA)  —  Eric Thames and Jesus Aguilar both homered as the Brewers took down the Giants 5-3 in San Francisco.  Chase Anderson lasted only four innings but gave up just three runs.  Matt Albers picked up the win for Milwaukee, which avoided a three-game sweep.  Kevin Pillar, Brandon Belt and Jeff Samardzija each notched an RBI for San Francisco.  Samardzija took the loss after giving up four runs over five innings for the Giants, who had a four-game win streak snapped. >>Dodgers Defeat Cubs

(Los Angeles, CA)  —  Alex Verdugo made a game-saving catch for the game’s final out as the Dodgers edge out the Cubs 3-2 in Los Angeles.  Cody Bellinger hit his 23rd homer for Los Angeles which has won three of its last four.  Dodgers starter Hyun-Jin Ryu allowed two unearned runs and seven hits in seven innings.  He struck out eight without allowing a walk.  Ryu is 6-and-0 with an 0.87 ERA at home.  Willson Contreras hit an RBI single and David Bote followed with a sacrifice fly in the sixth for Chicago in the loss.  Steve Cishek gets the loss on the mound for the Cubs.  Chicago has lost five of its last seven on the road. >>Red Sox Rally, Beat Orioles

(Baltimore, MD)  —  The Red Sox scored five runs in the 10th, but the Orioles made them earn it as Boston won 8-6 in Baltimore.  Rafael Devers hit a long home run to left-center to kick off the scoring in extras and Mookie Betts drove in two.  Brandon Workman picked up his fifth win of the year for the Sox, who have won five in-a-row.  Stevie Wilkerson and Trey Mancini both homered in a three-run bottom of the 10th for the O’s, but it wasn’t enough.  Hanser Alberto went 3-for-6 with a pair of RBI, including one in the eighth to give the Birds the temporary 3-2 lead.  Mychal Givens took the loss.  Baltimore has dropped five straight and is 22-and-a-half back in the AL East. >>Yankees Turn Back Pale Hose

(Chicago, IL)  —  Brett Gardner and Austin Romine each drove in four runs as the Yankees demolished the White Sox 10-3 in Chicago.  Cameron Maybin blasted a solo shot for New York.  James Paxton allowed two runs over six innings to earn the win as the Yankees split the four-game series.  Odrisamer Despaigne  took the loss, allowing seven runs in less than five innings.  James McCann and Jose Abreu homered in defeat.  The White Sox are 5-and-3 in their last eight games.