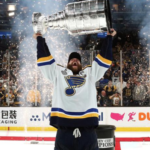 >>Blues-Bruins Game Seven Is Most Watched NHL Game On Record

(Boston, MA)  —  Game seven of the Stanley Cup Final between the Blues and Bruins on NBC will go down in history.  The game that saw the Blues defeat the Boston Bruins, 4-1, to capture their first-ever Stanley Cup, averaged a Total Audience Delivery of nearly 9 million viewers, making it the most watched NHL game on record.  Viewership peaked at 10.4 million viewers.  The game was also the most streamed NHL game ever.