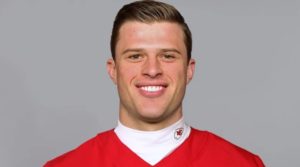 (Kansas City, MO)  —  Several outlets report the Chiefs and Harrison Butker have agreed to a five-year contract extension.  It is for nearly 20-million dollars, making him one of the highest paid kickers in the NFL.  Butker announced on Twitter he has signed the extension.  He has been accurate on 62 of 69 field goal attempts since joining Kansas City.

(Kansas City, MO)  —  The Chiefs signed Northwest Missouri State running back Josh Caldwell as the three-day mandatory camp ended.  The Chiefs still have one roster spot vacant.  The Chiefs will be off until late July when they report to training camp in St. Joseph on the Missouri Western campus.

Previous Post: « Stanley Cup clincher most watched NHL game
Next Post: Blues parade and rally to be held on Saturday. Things to know if you’re headed to St. Louis »