(NASCAR)—Clint Bowyer’s shot at winning his second straight race at Michigan lasted only sixty-five percent of the way through the rain-delayed race.  A crash on the 130th lap of what became a 203 overtime race took him out of contention while running among the leaders.

Joey Logano held off Kurt Busch in a two-lap shootout after a final caution. The race had been called off Sunday after a long delay waiting for weather to clear. 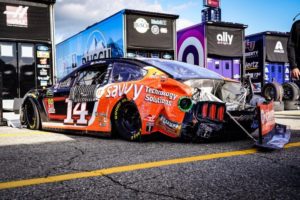 Bowyer was trying to pass Erik Jones, when Jones lost control of the back end of his car, forcing Bowyer to try to go under him only to find Austin Dillon also running low.  Bowyer’s car touched the Jones car and then slid up to hit the wall.

NASCAR is off next week and Bowyer is looking forward to some “Lake time” at his home at the Lake of the Ozarks. But he’s concerned with the ongoing flooding affecting not only his lake home but also affecting his friends at his hometown of Emporia, Kansas.

“These people are getting beat up in the Midwest bad,” he told NASCAR’s Reid Spencer.  “Whether it is tornadoes or flooding, whatever the case may be. It is literally a text or phone call every single day of people that you know.”