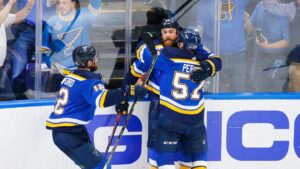 The Boston Bruins used a big performance from goalie Tuukka Rask, their penalty kill, and a barrage of goals in the third period to prevent the St. Louis Blues from winning the Stanley Cup for the first time.

A 5-1, Game 6 win at Enterprise Center on Sunday extended the Stanley Cup Final to a decisive Game 7 in Boston Wednesday night.

Rask made 28 saves, Brandon Carlo scored the game-winner, and Zdeno Chara scored the last of four third-period goals for Boston, which on Wednesday will host a Cup Final Game 7 for the first time.

Ryan O’Reilly scored for a third straight game, and Jordan Binnington made 27 saves for St. Louis, which lost two of its three home games in the best-of-7 series.