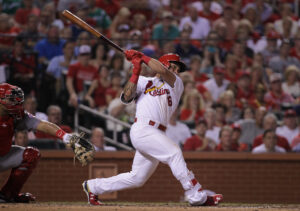 Kolten Wong drove in a run but the Cardinals fell 5-1 to the Cubs in their series finale at Wrigley Field.

Kyle Schwarber drove in a pair for Chicago while Kyle Hendricks only gave up one run over seven innings.

The Cardinals are now 0-6 in Chicago to start the season having been swept by the Cubs in both series.

Glenn Sparkman gave the Royals a quality start, but took the loss in a 5-2 loss to the White Sox at Kauffman Stadium.

The Royals lost for the eighth time in nine games and are tied with the Orioles for the worst record in the majors at 20-45.