It’s not often that we lead off our weekend summary of automobile racing with Formula 1. But things were so bizarre at the Canadian Grand Prix that we’re doing it this week.

(FORMULA 1)—Sebastian Vettel crossed the finish line in the Canadian Grand Prix ahead of Lewis Hamlton but stewards handed him a five-second penalty, dropping Vettel to second, 3.7 seconds behind Hamilton.

The two had been fighting for the lead much of the race until Vettel went wide on a turn and cut the apex to get back on track.  As he re-entered the racing surface, the rear of his car slid across the nose of Hamlton’s car, forcing Hamilton to swerve towards the wall.  Ten laps later, stewards ruled Vettel had rejoined the race in an unsafe matter and had forced Hamilton off the track.

On the podium after the race, Hamilton invited Vettel to join him on the top step.

Instead of Vettel’s Ferrari ending a streak of seven straight wins by Mercedes, the streak has stretched to eight.  His team is appealing the stewards’ ruling.

(INDYCAR)—Joseph Newgarden chalked up his first win at the Texas Motor Speedway, the thirteenth of his career. Newgarden beat Alexander Rossi to the line by eight-tenths of a second. 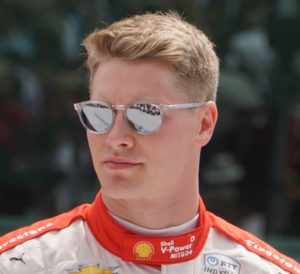 He averaged more than 186 mph in becoming the circuit’s first three-time winner this year.  The first 86 laps were run at an average speed of more than 205 mph.  Newgarden’s victory puts him at the top of the points standings going into the second half of the IndyCar season as he looks for his second series championship.  He was the IndyCar champ in 2017. Rossi is second in the points, with Indianapolis 500 winner Simon Pagenaud third and five-time series champion Scott Dixon fourth.

The race marked the first time since 2001 that American drivers had occupied the top five spots at the finish of a race.  Graham Rahal finished behind Rossi with rookie Santino Ferrucci and Ryan Hunter-Reay rounding out the top five.

Pole-sitter Takuma Sato led the first sixty laps but a botched pit stop left him three laps back, in fifteenth.  Eight cars finished on the leader’s lap within 4.3 seconds of one another.

(NASCAR)—The NASCAR race at Michigan International Speedway was rained out. The green flag has been re-scheduled for 4 p.m., our time, tomorrow (Monday).