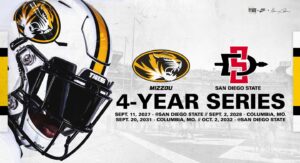 The University of Missouri and San Diego State University have agreed to a four-year home-and-home football series to be played during a six-year stretch from 2027-2032, as announced jointly by the schools today.

Mizzou Director of Athletics Jim Sterk served in the same capacity at San Diego State for six seasons, from 2010-11 through 2015-16, before coming to MU in August of 2016.