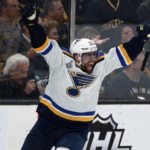 >>Blues A Win Away From Stanley Cup Title

(Boston, MA)  —  The St. Louis Blues are just a win away from their first Stanley Cup title.  They beat the Bruins 2-1 in Game Five in Boston.  Ryan O’Reilly scored 55 seconds into the second period and David Perron made it 2-0 Blues midway through the third.  Perron’s goal came after a controversial trip by Tyler Bozak wasn’t called.  While the call may not have gone in favor of Boston, Blues fans remember the hand pass that led to an overtime goal for San Jose. The good teams respond from controversy. The Bruins made it a game when Jake DeBrusk scored for Boston just under three minutes later, but the B’s could not get the equalizer.  Jordan Binnington made 38 saves for St. Louis, while Tuukka Rask stopped 19 shots for Boston.

In the previous 25 times that a series has been tied 2-2, the team that wins Game 5 has gone onto win the Stanley Cup 18 times.

Once again Enterprise Center was packed with Blues fans watching the road game.

The Blues lead the best-of-seven series 3-2 and can clinch at home in Game Six on Sunday.