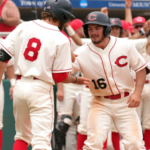 The Mules and No. 1 seed Colorado Mesa squared off for the third time in Cary at the NCAA Division II Baseball Championship, and while Ben Kelsch threw a gem in his final career start, the bats fell silent as the Mules dropped the national semifinal game 1-0 to the Mavericks. The season ends with the Mules record at 46-16 and based on their 2-3 record at the National Championship, that’s good enough to finish as the third place team. Colorado Mesa broke through in the seventh. Back-to-back hits to start the inning put runners on the corners with nobody out. A sacrifice fly plated the run for the Mavericks.

News and Notes
• Going to a fifth game at the NCAA National Championship is the deepest the Mules have advanced since 2004.
• Zak Whalin picked up career hit number 100 with a double in the third.
• Ben Kelsch finishes his career having thrown 221.2 innings, that puts him ninth all-time in Mules history.
• This was the first time UCM had been shutout in 104 games dating back to March 2, 2018 at Washburn.
• Playing on June 6 was the deepest into the calendar UCM had ever played.
• This is the Mules fifth third-place finish at the NCAA Championship in team history.

Previous Post: « Blues one win away from Stanley Cup after 2-1 win over Bruins
Next Post: MLB recaps: Watch DeJong’s game winning homer as Cards gain on Cubs ahead of weekend series »