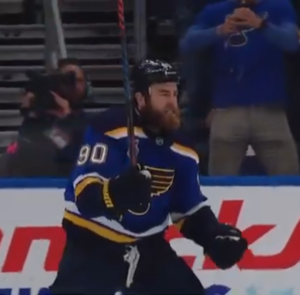 The Stanley Cup Final is now a best-of-three.  The Blues scored a pair of third-period goals to beat the Bruins 4-2 in Game Four in St. Louis.  Ryan O’Reilly, who had just two assists in the first three games, scored two goals for the Blues.  Vladimir Tarasenko also lit the lamp, and Brayden Schenn’s empty-netter sealed the St. Louis win.

The Blues needed a big game from O’Reilly was quiet early in this series.

O’Reilly, who entered with three goals in his last 21 Stanley Cup Playoff games, scored in the opening minute and then broke a tie with 9:22 remaining. O’Reilly scored 43 seconds into the game on a wraparound tucking the puck between the post on the pad of Bruins goalie Tuukka Rask. O’Reilly describes the game winner.

The series shifts back to Boston on Thursday.