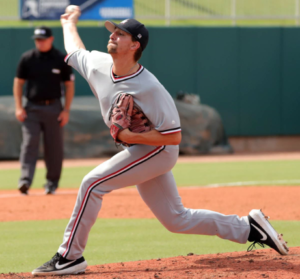 At the first game in the 2019 NCAA Division II Baseball Championship in Cary, NC, Central Missouri scored seven runs in the first three innings and were carried by starter Ben Kelsch who picked up the win in a 9-4 victory over Ashland. The win puts the Mules at 44-14 this season, their most wins since 2012 when they won 48 games.

Central Missouri broke it open with a four-run second inning. Donovan Ditto and Zak Whalin were each by a pitch to put runners on base. Micah Evans poked one the other way for a base hit to score ditto. One batter later, Mason Janvrin put a charge into one for a double deep to left center field to bring home Whalin. After an intentional walk to Erik Webb to load the bases, Schnurbusch again came up big, singling on the first pitch he saw to drive in two.

The Mules played small ball as Janvrin beat out a bunt single allowing another run to score. Micah Evans kept running and scored from second on the play for a 7-0 lead. Alex Madera made it a 9-2 game singling just over the glove of the shortstop to score Whalin and Janvrin.

Ben Kelsch got the started and lasted 6.1 innings. He allowed four runs on six hits with a walk and six strikeouts.

News and Notes
• Kelsch made his 56 career appearance to move into the Mules all-time top-10.
• The win is the Mules 30th all-time at the Division II Championship. They are 30-31 in 61 Championship games.
• Erik Webb added to his D2 lead with his 26th double of the season in the first inning.
• Mason Janvrin continues to add to his UCM single season hits record. He is now up to 109.
• All but one Mules in the lineup had a hit or scored a run.
• Conor Dryer’s four strikeouts are a career-best.
• Central Missouri moves to 4-0 all-time against Ashland.
• Kelsch threw a first pitch strike to 20 of 26 batters he faced.
• Six of the Mules nine RBI came with two outs.
• The Mules hit .500 (7-14) with two outs while Ashland was 0-8.