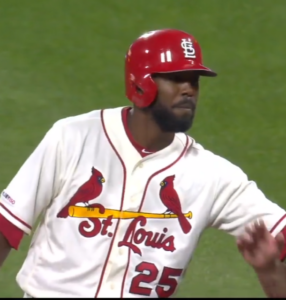 Dexter Fowler and Harrison Bader hit back-to-back
homers in the eighth inning, and St. Louis outlasted Chicago in a
game that ended early Sunday after a rain delay of over three hours.

Paul Goldschmidt also hit a home run for the Cardinals (29-28), who
have won three straight for the first time since a five-game streak
in late April. It was also St. Louis’ first series win since April
30 against Washington.

Joey Gallo hit a tie-breaking home run for
the second straight game before leaving in the fifth inning due to
injury as Texas beat Kansas City.

Homer Bailey (4-6) gave up four runs on six hits and two walks in 3
2/3 innings for his fourth straight start without a victory.

The Royals have lost five of their last six games and have the
worst road record in the majors at 8-22.

Orlando Arcia hit his second homer of the game, a
two-run drive in the 13th inning that sent Milwaukee over
Pittsburgh.

Both teams blew late leads before Arcia connected with two outs off
Alex McRae (0-1) for his first multi-homer game in the majors.
Earlier, Arcia hit a two-run homer in the second.

Starling Marte had four hits for Pittsburgh, including a three-run
homer in the eighth for a 10-8 lead.

Mike Moustakas hit his third home run in as many games for the
Brewers before leaving in the ninth after suffering a right hand
bruise from being hit by a pitch.

The Twins, who lead the majors with 108 homers, failed to go deep
while splitting the first two games of the series at Tropicana
Field.

The Indians climbed back to .500 and prevented the White Sox from
reaching the break-even mark for the first time since April 5.