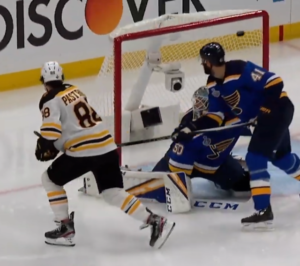 Seven different players scored for Boston as the Bruins demolished the Blues 7-2 in Game Three of the Stanley Cup Final in St. Louis.  Patrice Bergeron, Charlie Coyle and Sean Kuraly opened the scoring for Boston in the first.  A failed Blues challenge on an offsides led to a powerplay into the second, which led to a David Pastrnak goal to make it 4-0.  From there it was smooth sailing as Tuukka Rask stopped 27 of 29 shots for the Bruins, who take a 2-1 series lead.  Ivan Barbashev and Colton Parayko both scored for the Blues.  Jordan Binnington was pulled in the second period after allowing five goals on 19 shots.  Jake Allen gave up a goal in relief for St. Louis.

The Bruins went 4-for-4 on their power play scoring on four shots and chased Binnington from the net for the first time in his pro career. In a small sample size, history has shown Binnington can bounce back.  He is 12-2 with a 1.82 goals-against average after a loss.

Torey Krug, whose hit on Robert Thomas in Game One sparked Boston, scored a goal and added three assists.  Bergeron finished with one goal and two assists.  Boston is 14-for-28 on the powerplay in road playoff games this season. Ryan O’Reilly says the Blues folded against adversity