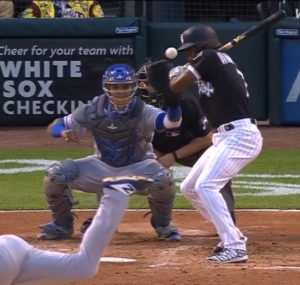 (Chicago, IL)  —  Jose Abreu hit a three-run homer to help the White Sox beat the Royals 8-7 in Chicago.  Tim Anderson doubled home James McCann with the decisive run with two outs in the eighth.  Yoán Moncada hit a two-run homer in the first for Chicago, which swept the three-game series.  Jorge Soler homered and drove in three KC runs.  Nicky Lopez also had three RBI, including a two-run single in the eighth to tie it as the Royals overcame a six-run deficit.  KC starter Glenn Sparkman was ejected in the second after hitting Anderson with a pitch.  The Royals have lost six-of-seven.

Glenn Sparkman was ejected by home-plate umpire Mark Carlson after a changeup by Sparkman hit off the top of White Sox shortstop Tim Anderson’s helmet in the second inning. Anderson and the Royals were involved in another beanball incident at Guaranteed Rate Field in mid-April after Royals right-hander Brad Keller hit Anderson in the backside after Anderson had homered in his previous at-bat and celebrated by throwing his bat.   Ned Yost says there was never intent to hit Anderson. 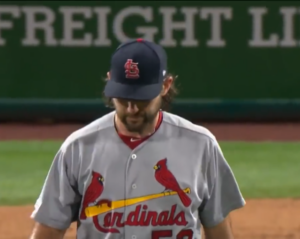 (Philadelphia, PA)  —  Bryce Harper went 3-for-4 with a home run and four RBI as the Phillies stormed past the Cardinals 11-4 in Philadelphia.  Scott Kingery and Maikel Franco hit back-to-back homers in the fifth as the Phils won their second straight.  Aaron Nola struck out eight over seven innings of one-run ball for the win.  Matt Wieters homered and doubled in a run for St. Louis, which lost its third straight.  Genesis Cabrera took the loss after being charged with five runs in three-and-two-thirds innings.  He left the game in the fourth trailing 4-1.  Michael Wacha came on in relief and surrendered three more runs in the fourth and four more in the fifth.

(Houston, TX)  —  A little girl is expected to be okay after getting hit by a ball in the Cubs’ 2-1 win over the Astros in Houston.  Albert Almora Jr. hit a liner into the stands down the third-base line in the fourth inning that hit a little girl.  She was reportedly awake and talking and went to the hospital as a precaution.  Almora was crying and had to be consoled.  Kyle Schwarber and Kris Bryant homered to supply the offense, and Kyle Hendricks tossed eight innings of one-run ball for the win.  Wade Miley took the tough-luck loss for Houston.  Josh Reddick plated Houston’s lone run with a sac-fly.

CUBS-CARDINALS THIS WEEKEND IN ST. LOUIS

The Cubs have Thursday off. The Cardinals play the Phillies in the afternoon. Entering play on Thursday, St. Louis is five games out of first place and in fourth place, just one game ahead of Cincinnati.

(Cincinnati, OH) — Colin Moran broke a scoreless tie with a three-run homer in the sixth inning and the Pirates went on to beat the Reds 7-2 in Cincinnati. Josh Bell belted a three-run shot to cap a four-run seventh for the Bucs, who earned a split of the four-game set. Steven Brault gave up just three hits over five-and-a-third shutout innings for the win. Derek Dietrich had an RBI single in the eighth and Nick Senzel homered in the ninth for the Reds’ only runs. Anthony DeSclafani took the loss.