Brunswick in northern Missouri is getting hammered by flooding from the Missouri and Grand Rivers. About 50 Missouri National Guard soldiers and some state prisoners are piling the sandbags high to try and keep the flood waters out there.

Adjutant General Steve Danner says they are focusing on the west end to save as many homes as possible.

“The crest seems to have moved from 32 feet to roughly 36 feet, which would be a record. That would be even higher than it was in 1993,” he says.

Danner says this year’s flooding is as bad as he’s seen in Missouri.

“I worked the 1993 flood. It was a different time then in the sense that Missouri didn’t have the levees and the floodways. We had a lot of damage to farms and so forth,” Danner says. “The government buyouts and so forth have created a lot of spillways and what I’ll call greenways down to the river for passage of water without doing damage to homes or structures. However, this one now even that being the case since 1993 has a lot of the homes in the bottoms were bought out. Now the water is getting even higher than it was at that time. It’s worse than it was either the 2011 or the 2012 floods.” 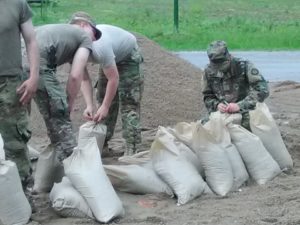 His soldiers train regularly on what is referred to as domestic operations – to help the community in times of need.

“The Missouri National Guard wears two hats. We serve at the pleasure of the president of the United States when we’re called to active duty. Of course, that’s typical of what everybody thinks in going to Iraq or Afghanistan or somewhere we call OCONUS – outside the continental United States. Our other hat is to serve at the pleasure of the governor as our commander-in-chief and to be called out to assist in bad weather events or other either manmade or natural disasters,” he says.

Danner goes on to say the National Guard is community-driven. Many of the soldiers helping in Brunswick are from that area.

“Those are neighbors helping neighbors,” he says. “That’s just the way we look at it. We’re hear to help our good citizens of Missouri through bad times and bad things that happen.”

The guard has high water rescue operations on alert in Jefferson City if needed. Soldiers could also be working in the next few days along the Mississippi River on the eastern side of the state.

“I haven’t had a direct order, but I know that over on the east side with the Mississippi (River) coming up, just want to alert people just to be very careful. All those streams and even the ditches are running water,” he says.

The soldiers, prisoners and citizens are dealing with some tough elements – high humidity, plenty of mosquitoes on the prowl, dirty water, and snakes slithering through the water.

Previous Post: « Tornado debris “rains down” on Kansas City International Airport; KCI closed for five hours (AUDIO)
Next Post: MLB recaps: Three-run first not enough for Cards. Losing all around for the Royals »