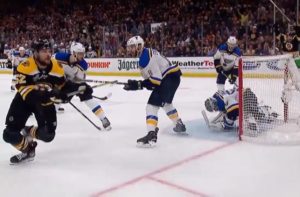 >>Bruins Rally Past Blues In Game One Of Stanley Cup Final

The Bruins rallied back from two goals down to beat the Blues 4-2 in Game One of the Stanley Cup Final in Boston.  St. Louis led 2-0 early in the second period following goals by Brayden Schenn and Vladimir Tarasenko.  Jordan Binnington made 34 saves for the Blues in the loss.  Schenn made it 1-0 lead in the first period when he was able to skate into the slot and beat Bruins goalie Tuukka Rask over his right shoulder. Boston certainly showed rust after an 11-day layoff between playoff series and the Blues jumped on them early in the second period.  In the first minute of the period, David Pastrnak got sloppy behind the Bruins’ net and Schenn fed a pass it to Vladimir Tarasenko in the slot to make it 2-0.

Just 1:16 later, Boston got on the board. Connor Clifton tipped in a pass to cut the deficit to one. And in the middle of the second, on the Bruins’ fourth power play of the game, Charlie McAvoy came right in the slot and beat Binnington with a wrister.  Sean Kuraly scored to break a third-period tie and assisted on another goal.  Brad Marchand added an empty netter

St. Louis looks to even the series in Game two tomorrow night at TD Garden.

The Blues are giving back to their front office staff.  Full-time employees were informed last week that they would be going to Boston for the Stanley Cup Final.  Front office staff, along with the families of the players and coaches, boarded chartered flights to the east coast for Games One and Two.