(INDYCAR)—A driver whose career has been rumored to be uncertain has secured a position in racing history with a heart-stopping drive to victory in the Indianapolis 500. 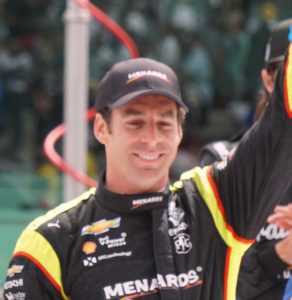 Simon Pagenaud, IndyCar’s2016 series champion, outdueled the field to dominate the month of May at the Brickyard, beating 2016 race champion Alexander Rossi by .2086 second. Seventeen drivers finished on the leader’s lap, separated by less than fifteen seconds and .245 mph after the 500 miles.

Pagenaud led 81 of the first 100 laps, but was challenged in the second half of the race by nine other drivers who grabbed the lead for short stints. None was as threatening as Rossi, who has been rumored to be taking over Pagenaud’s on the Penske team next year. 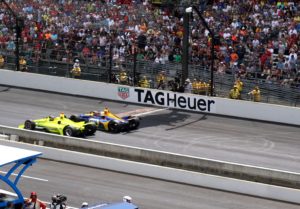 Rossi, who has never finished lower than seventh in his three previous Indianapolis 500s, dogged Pagenaud for the last twenty laps and took the lead at the start of the 198th lap. But Pagenaud rallied back 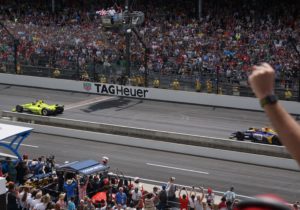 And regained the lead with one to go and posted the seventh-closest victory in the history of the race. His average speed of 175.794 mph was just .004 mph faster than Rossi’s average.  The 2017 winner of the race, Takuma Sato charged back from being a lap down early in the race and  crossed the finish line .34 seconds behind Pagenaud.  Josef Newgarden, the 2017 IndyCar series champion, was fourth, nine-tenths of second back.

Pagenaud, the seventh driver from France to win in the race’s 103-year history,  called his victory “pretty amazing, a dream come true.”  Was he motivated by questions about his job security?  No. “I’m just focused on the job, man,” he said. “When you have a car like this, a team like this, you just work your way.  It’s all about achieving and executing at the end, and we did execute perfectly today.” 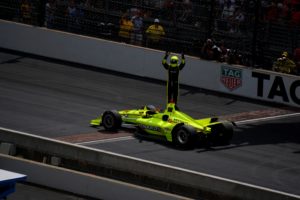 The win is the 18th victory in the Indianapolis 500 for Roger Penske, who celebrated his fiftieth year of fielding cars for the race.

Another 50th anniversary turned out less well for the Andretti family, which celebrated fifty years since Mario Andretti won his only Indianapolis 500.  Mario’s grandson, Marco, ran poorly all day and finished 26th.  Mario’s son, Michael, owns the car that Rossi drove to second.

(Formula 1)—With Max Verstappen filling his rear view mirrors for most of the last part of the race, Lewis Hamilton hung on to the lead with fading tires for the last 67 laps of the Monaco Grand Prix to post his 77th career victory and widen his points lead over teammate Valtteri Bottas, who finished third.

Verstappen dropped to fourth at the end. Sebastian Vettel broke up the string of five straight 1-2 finishes by Mercedes by slipping pasts Bottas for second.

(NASCAR)—Racing’s longest day ended with the 600-mile race at Charlotte and a wild restart with four laps to go. Martin Truex Jr., went four-wide on the restart and held off Joey Logano.

Truex rebounded from a blown tire that led him to scrape the wall early in the race. The win is his third of the eyar. He, Kyle Busch, and Brad Keselowski have three wins each in the first half of the regular NASCAR season.

Keselowski’s flat tire that sent him spinning into the pits led to the restart. David Ragan stayed on the track and took the lead during the caution period while the other leaders pitted for new rubber, leading to the wild restart that eventually shuffled Ragan back to 15th at the end.