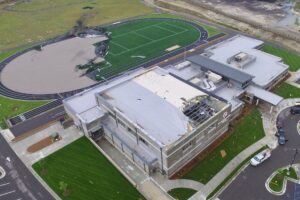 When Special Olympics CEO Susan Stegeman and her husband heard the sirens, they took shelter in their basement on Wednesday night not far from where she works.  When she heard there was a tornado in the area of Highways 54 and 179 her first thoughts were not of her own house, but work.

“Oh no, the campus,” Stegeman thought.

She was hopeful that most of the quarry walls that surround the multi-million dollar complex on the south end of Jefferson City would provide enough protection for the building that just opened at the end of 2018.   Stegeman didn’t get the full assessment of the damage to the building until Thursday morning.

The entire glass entrance at the front of the building was blown out.  A portion of the roof that covers the full-court basketball surface was missing and half of the field turf that surrounds the track behind the main building was peeled away.

After spending most of the late night and early morning hours assessing the damage with engineers and building designers, Stegeman had a few moments Thursday afternoon to shower and change clothes before getting right back to work. She says 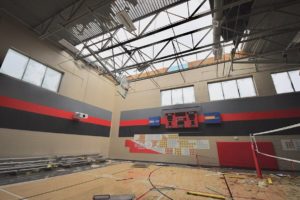 for the next 48 hours, while they’ve ceased operations at the facility, the staff will focus on evaluating the damage and securing the facility.  Phase two will turn their attention to making a decision on the State Summer Games which begin May 31-June 2.

Stegeman said the outpouring of support from the community has been amazing.

“People come forward all the time ‘How can I help?’  We’ve had offers of trucks, manpower, storage units, office space.  We do have plans in place for temporary places to work and a long term option as well that has come forward,” said Stegeman.

The Training for Life Campus is a facility on more than 16 acres in Jefferson City. This campus serves current and future Missouri athletes with intellectual disabilities. It is the first facility of its kind in the world, with the purpose of enriching the lives of their athletes.  SOMO and the Campus For Life celebrated a ribbon cutting ceremony on Nov. 1, 2018.

Stegeman understands there are other businesses, schools and families that are affected by the tornado which makes the support for the SOMO community overwhelming.