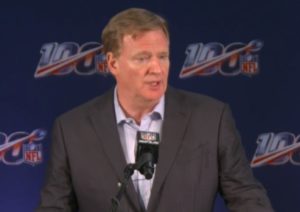 At the NFL spring meeting, commissioner Roger Goodell said they are still gathering more information and waiting for the court proceedings before making any decision on Chiefs wide receiver Tyreek Hill.  The Kansas Department for Children and Families and the Johnson County District Attorney are looking into alleged child abuse or neglect involving Hill’s son.  Goodell said he preparing to do an interview with Hill and will make a decision on his status after that.  Goodell said he “won’t speculate about where we’ll go.”  Hill has been suspended from all team activities.

“We are prepared to go ahead and have an interview whenever we have the permission to do so,” he explained. ”And then we’ll make a determination based on what information we have at that point in time. I won’t speculate about where we’ll go, but we’ll certainly get all the information we can as soon as possible,” Goodell added.