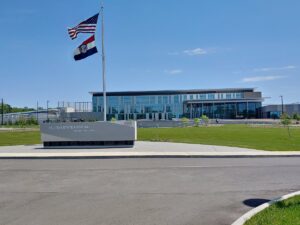 Missouri no longer has the oldest public mental hospital west of the Mississippi River. The 168-year-old Fulton State Hospital medium and maximum-security building in central Missouri will be replaced in July. According to former Governor Jay Nixon, the new building is the finest mental hospital in the United States.

“We set that bar high. I am 100% confident that today the Show-Me State is leading our country,” says Nixon.

At a ribbon cutting ceremony Wednesday, the 300-bed location was unveiled that showcases Nixon’s name. He says the old site is a dangerous place for the patients, workers and visitors. During his days as Missouri attorney general, Nixon dealt with many legal cases originating at the hospital.

“You defend the state on worker’s compensation and second injury fund cases,” says Nixon. “We just saw this incredible, inordinate number of people who were injured here. Then we began to see more and more significant turnover, especially among nurses and things like that. Folks were giving us trouble about overtime but heck, we were out there trying to recruit people for those positions – they’re dangerous, they’re difficult, people are getting hurt.”

Nixon says a lot of work went into the design of the $211 million hospital to create a more upbeat and safer environment.

“In a facility like this (old building), this was an 1851 basically prison with dark halls and dangerous places. You almost had to visualize what you wanted,” Nixon says.

What makes the new place so great? It includes a lot of natural light – taking away the institutional feel that many mental hospitals carry. The décor gives the facility more of a private hospital vibe. The lighting fixtures are modern. The ceilings are high and the hallways are wider.

There’s a chapel, hair salon, outdoor areas with a basketball court, café, and a game room. A visitation area includes private rooms and a place for kids to play. Patients can also whip up something to eat and practice their culinary skills in a training kitchen. To top it all off, the tables and chairs in these areas are not easy to pick up and throw when someone grows upset.

The old building has barriers for staff trying to monitor clients. Missouri Department of Mental Health Director Mark Stringer says the new hospital has lines of sight that are “1000% better.”

Sound proofing has stepped up at the new site. Noises at the old location echo throughout, creating additional challenges for patients suffering from psychotic disorders who might already hear other voices.

Stringer says the new site should also reduce the amount of overtime the staff is required to work.

“When you have to work overtime time and time again, you get tired and then you make mistakes,” he says.

Stringer goes on to say the state’s five mental hospitals always have staff shortages. He says the Fulton State Hospital staff won’t be downsized as a result of the new site.

The hospital’s Chief Operating Officer, Andy Atkinson, says the new facility will be life changing for its patients and employees.

“This will dramatically improve their quality of life,” he says.

Nixon, a Democrat and Missouri’s 55th governor, says getting the hospital built was a bipartisan effort with the state Legislature.

“This is the kind of things you get if you watch your money well, even in tough times and pass up the simple solutions for one of the best long-term solutions. Here we are, nine, ten years later in the best facility of its type in the country,” says Nixon. “This is the one that just had to be done and didn’t really have any political constituency. When you think about it, these folks are in deep distress. We were able to get folks to come together to do this because it was the right thing to do. I’m confident that it’ll help the department continue to keep longevity among employees, safety among employees and ultimately much better outcomes here. A facility of this capacity can make a huge difference in outcomes.”

He goes on to say the facility could attract research money.

“Especially with the University of Missouri and all the professionals trained there, I think we’re just at the beginning at some of the research,” Nixon says. “My sense is this is a place that will, in the years to come, end up being a very good clinical research facility for important, cutting-edge treatments for the entire country if not the entire world. “

Patients will start moving into the building in July and all the beds will be filled.

Stringer says no decisions have been made about the future use of the old location.

Riddle, a Republican from central Missouri’s Mokane, says the new hospital is a dream come true for the state and her district that encompasses Fulton.

“This is eleven years finally getting to see this project done,” she says. “We’re going to change the world.”