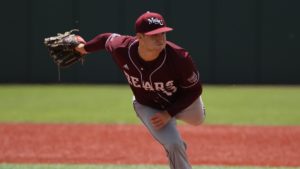 Despite a dominant combined mound effort from Davis Schwab and Hayden Juenger, Missouri State dropped a 1-0 pitcher’s duel with Missouri Valley Conference regular-season co-champ DBU Wednesday afternoon on day two of the MVC Baseball Championship at Duffy Bass Field. DBU’s Jordan Martinson (8-3) stifled the Missouri State offense, teaming up with Burl Carraway on a three-hit shutout in the third-straight one-run contest for the Bears and Patriots in MVC Championship play.

Missouri State, which eclipsed a program single-season record with its 35th loss of the season, will face Southern Illinois at 11 a.m.