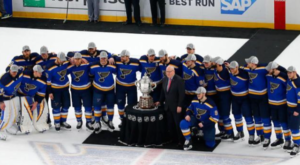 The Blues are headed to their first Stanley Cup Final since 1970 following a 5-1 win against the San Jose Sharks in Game Six of the Western Conference finals at the Enterprise Center.

St. Louis jumped out to a 2-0 lead in the first on goals by David Perron and Vladimir Tarasenko.  Ryan O’Reilly had three assists and Jordan Binnington made 25 saves for the Blues, who won the final three games of the best-of-seven series.

On Jan. 2, the Blues were in last place overall in the NHL. The fired coach, Mike Yeo, naming AHL coach Craig Berube as the interim. The Blues switched starting goalies and used an 11-game winning streak to get them back into playoff contention.  Prior to this season, four teams in the post-expansion era have reached the Finals after ranking among the bottom three in the standings at any point after 20 games: the 1967-68 Montreal Canadiens, 1967-68 Blues, 1990-91 Minnesota North Stars and 2009-10 Philadelphia Flyers. The Canadiens were the only team to win the Stanley Cup.

Rookie Sammy Blais explains the feeling on the bench when the players heard the fans chanting “WE WANT THE CUP!” 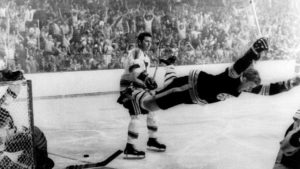 There is the famous photo of Bobby Orr scoring the 1970 Stanley Cup-winning goal to beat his St. Louis Blues.  Orr and the Boston Bruins swept the expansion-era Blues, who were making their third straight Finals appearance in their first three years of existence. Now, Boston is in its third final in nine seasons and St. Louis is back for the first time in 49 years.  A long-awaited rematch for the Blues organization.
between two of the NHL’s best teams since Jan. 1.

The Bruins swept Carolina in the Eastern Conference fina and are favored by many in the series that begins Monday in Boston. Goaltender Tuukka Rask is a contender for the Conn Smythe Trophy (Playoff MVP). Brad Marchand 18 points in 17 games, and there’s a mix of veterans with Cup Finals experience coming from the 2011 Stanley Cup-winning team and their brand of fresh players.  It will also mark the return of David Backes.

Boston will have a week and a half off before Game 1, and St. Louis will go six days without playing.  The Finals begin on Monday.