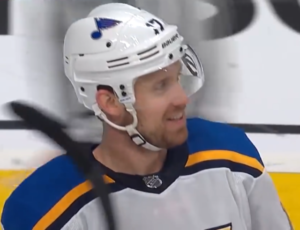 Jaden Schwartz’s hat trick in Game 5 on Sunday helped give the Blues a 3-2 series lead against the San Jose Sharks in the Western Conference final.  With one more victory, the Blues could advance to their first Stanley Cup Final since 1970 when they host Game 6 Tuesday night.

Schwartz and Vladimir Tarasenko have played huge roles in the Blues’ playoff success. Schwartz has scored 12 goals this postseason after tallying just 11 in 69 regular season games.  He also has two hat tricks to his credit and leads the team with 16 points. Tarasenko, who in previous playoff years has been criticized for not shooting much,  has come up with some big assists.   He’s second on the team with seven goals and 12 assists.  Ryan O’Reilly talks about what makes Tarasenko such a threat even when he’s not scoring.

Schwartz’s first goal came with 15 seconds left in regulation to snap a 2-2 tie in Game 5 in the first round against Winnipeg. He followed that up with a hat trick in Game 6 to send the Blues to the second round. Schwartz is the first player to have two hat tricks in the same playoffs since 2008. Schwartz went 23 games without a goal during the regular season.  Teammate Tyler Bozak has been amazed by what Schwartz has accomplished.

Team captain Alex Pietrangelo says the goal scorer isn’t even half the story of what makes Schwartz so valuable to the team.