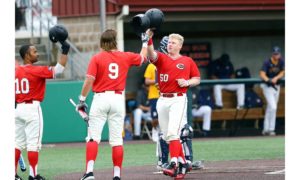 The game actually started at 9 a.m. Saturday morning. After a little more than half an inning of play, the game was suspended until Sunday. The Bronchos had runners on second and third with nobody out before the storm rolled in.  When they resumed on Sunday, UCO drove both of those runners in to take an early 2-0 lead.

The Mules had their first lead in the second. Cole Taylor and Mason Janvrin started the inning with singles. Harrison Schnurbusch drove them both in with a two-out double to center for a 3-2 lead. Central Missouri scored four more in the fourth. Erik Webb put the game out of reach, giving UCM a five-run lead, 7-2, with a deep three-run home run to left.

The Mules will take on Augustana in a best two-of-three series starting Friday, May 24 at 6 p.m. in Sioux Falls. The winner of the series will be the Central Region representative in the Division II College World Series.

Previous Post: « Mizzou softball pushes UCLA to the brink. SEMO picks up a win in regional play
Next Post: The helmets could soon come off for many motorcyclists in Missouri »