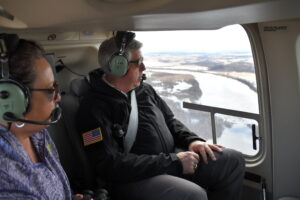 Missouri Governor Mike Parson is given an aerial tour of the flooding damage near northwest Missouri’s St. Joseph on March 15, 2019 (photo courtesy of the governor’s office)

The declaration makes federal assistance available for local governments and nonprofit agencies in 13 Missouri counties to recover from the storms and flooding. The aid can be used to repair damaged roads, bridges, and other public infrastructure, along with emergency response costs associated with the weather events.

On March 21, Parson declared a state of emergency due to worsening conditions along the Missouri and Mississippi rivers as a result of excessive rainfall, releases from upstream reservoirs, and snow melt.

“This disaster declaration means millions of dollars in vitally important federal reimbursements will be available for communities that are hurting because of damaged and destroyed roads, bridges, and other vitally important infrastructure,” Parson said in a press release. “I appreciate President Trump making the federal assistance available and all those who are already working to help our Missouri communities recover.”

U.S. Representative Sam Graves released a statement after the approval of the disaster declaration. Graves, a Republican from northern Missouri’s Tarkio, has a massive district that covers both the Missouri and Mississippi Rivers.

“President Trump’s approval of public assistance is welcome news for Northwest Missouri counties impacted by the recent flooding and I’m grateful that we have gotten this disaster declaration. It will go a long way towards helping our communities as they rebuild damaged infrastructure and remove flood debris. I’m hopeful we’ll also hear soon on Missouri’s request for individual assistance so individuals devastated by this flooding can receive the help they need as well.”

The President’s declaration also makes available assistance through the Federal Emergency Management Agency’s Hazard Mitigation Program to prevent or reduce long-term risk to life and property due to natural hazards.

Parson said the state expects to request the Public Assistance disaster declaration to be expanded to include additional counties as joint teams can fully assess damage in other counties. The federal government is continuing to review Parson’s request for Federal Emergency Management Agency assistance to individual residents in Andrew, Atchison, Buchanan, Holt, and Platte counties.