(NASCAR)—A question waiting to be answered before NASCAR’s longest race is whether part-time Missouri driver Clint Bowyer and Ryan Newman have spoken since their dustup at the end of the All-Star race in Charlotte Saturday night that saw Bowyer throwing punches at Newman, who was still in his car.

The all-star race was on, incidentally, by Kyle Larson who has had a disappointing season so far. The win was worth  one-million dollars.

Boyer, who started the race on the pole finished 12th and Newman was 13th.  They’d been getting on each other’s nerves throughout the race.

Newman claimed Bowyer “chopped” him (swerved in front of him, forcing Newman to slow or hit Bowyer) early in the race.  Bowyer said he thought Newman was a lap down and was hit in the rear but Bowyer says he didn’t see anything of Newman after that until the cool-down lap after the race. “He comes up and runs into my back and turns me all around. I pull up next to him and dumps me in (turn) four.”

Newman’s version was that He tapped Bowyer in the rear to “let him know I didn’t appreciate the way he raced me.  Then he body-slammed me.  Then I him back on the back straightaway and he cut across my nose in turn three.”

The contact in turn four sent Bowyer nose-first into the wall. “Where I come from, you get poked in the nose for that. That’s what he got.”  Bowyer was still in his driving suit, including his helmet.  Newman was still in his car, helmet off, and parked in pit lane when Bowyer ran to his car.

Newman told Fox Sports after the race, “It doesn’t take much of a man to fight someone with a helmet on. I think he should be embarrassed by himself.”

The incident put both of them in the NASCAR trailer for a meeting with Senior Vice President of competition, Scott Miller, who referred to the incident as “a little difference of opinion” on the track and in the trailer. He said they were in a “good place” after the trailer conference and there would be no penalties. But “If there starts to be any shenanigans, we will intervene.”

The Memorial Day Weekend race next weekend is Sunday night. At 600-miles, it is the longest race in the series.

(INDYCAR)—The Indianapolis Speedway has again shown that everybody has to earn a place in the Greatest Spectacle in Racing and that impressive credentials aren’t enough.

—As in the case of two-time Formula 1 Champion Fernando Alonso, the Rookie of the Year two years ago, who came up .019 mph of making the 33-car field for next weeks’ 103rd running of the Indianapolis 500.   Alonso had the 31st fastest speed on Saturday, meaning he had to run Sunday against five other drivers seeking the last three spots in the field.  His four-lap average of 227.353 mph was eclipsed by the last qualifier, Kyle Kaiser. 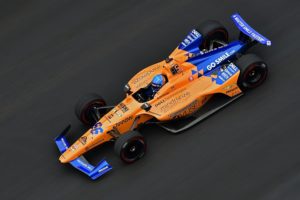 Alonso’s McLaren team faced adversity all week, missing the first day of practice with electrical problems.  Alonso crashed on the second day and did not run at all the next day as his team worked to prepare a new car for him. He had only Friday to get the car up to speed before Saturday qualifying.

The results of the second-day of qualifying are likely to raise questions.  Alonso’s speed was faster than three cars that earned locked-in starting positions on Saturday by being among the thirty fastest on the first day of qualifications (Zach Veach, 227.341; Felix Rosenqvist, 227.297; and Pippa Mann, 227.224).

This year’s qualification rules guaranteed spots for the race to the thirty fastest cars on the first day of qualifying.  Remaining cars had to fight for the last three positions.  The fastest nine cars on the first  day of qualifying had a run-off on Sunday that left Saturday’s provisional pole winner, Spencer Pigot,  starting third while Simon Pagenaud took the pole at 229.992 and Ed Carpenter got the spot in the middle of the front row at 229.889.  Pagenaud had been third-fastest on Saturday, behind Pigot and last year’s race-winner, Will Power, both of whom had four-lap averages of 230-plus.

(FORMULA 1)—Formula 1 teams head to Monaco with everybody trying to figure out how to catch Mercedes.  Mercedes drivers have finished 1-2 in the last five races.  McLaren driver Carlos Sainz told Motorsport.com that Formula One needs to be less predictable if expects to keep drawing fans to races, or if it expects races to survive.  There already is talk of replacing the Spanish Grand Prix next year with a Dutch Grand Prix on the Zandvoort circuit.