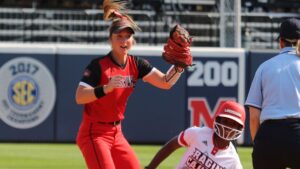 Lexie Corneaux’s one-out single scored the decisive run in the bottom of the sixth inning as #7 Louisiana (51-4) hung on for a 3-2 win over Southeast Missouri (45-17) Friday in the opening game of the NCAA Regional.

Corneaux broke a 2-2 tie with a single to left field and Alissa Dalton scored the winning run on the play. Corneaux’s hit was one of three in the inning for the Ragin’ Cajuns who won their 28th game in a row.

“I thought our kids competed well on a big stage against a really good pitcher,” said SEMO head coach Mark Redburn. “Defensively, we did a phenomenal job. Our short game just wasn’t there.”

Mykaela Arellanes launched the game’s first hit for a solo home run off the video board in right center to grab SEMO a 1-0 lead with one out in the top of the third inning. For Arellanes, it was her ninth home run and SEMO’s 73rd as a team this season.

ULL used a two-out rally to take the lead in the bottom half of the third. Julie Rawls walked and scored on an ensuing single up the middle by Sun Belt Conference Player of the Year Alissa Dalton to put the Ragin’ Cajuns ahead, 2-1.

Ohio Valley Conference Player of the Year Rachel Anderson, who reached base in her first two at-bats, smacked a triple off the center field wall to score Claudia Gallo and tie the game at 2-2 with two outs in the top of the fifth.

Sun Belt Pitcher of the Year Summer Ellyson improved to 38-4. Ellyson struck out 13 and allowed two runs on four hits in her complete game win. Ellyson leads the nation in wins.

Haley Thogmartin (22-7) was credited with the loss in relief. Thogmartin struck out two, waked one and gave up one run on three hits in 2.2 innings. Rachel Rook started in the circle and worked 3.1 innings, allowing two runs on four hits before giving way to Thogmartin in the fourth.

Anderson went 2-for-2 with a triple and RBI. She reached base three times and tied SEMO’s single-season record in triples with her 10th this year. Arellanes and Addison Barnouski followed with one hit each.

ULL had seven hits with Dalton and Raina O’Neal paving the way with two apiece.

SEMO drops to the loser’s bracket to face the loser of the Ole Miss and Chattanooga matchup at 2:30 p.m., CT, Saturday.

Previous Post: « What bills did the Missouri Legislature pass this year? See the list of top proposals.
Next Post: Moore drives in six to spark Mizzou in NCAA softball regional victory »