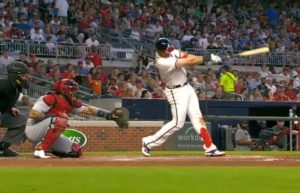 (Atlanta, GA)  —  The Braves collected 14 hits in a 10-2 rout of the Cardinals in Atlanta.  Adam Wainwright took the loss, giving up five runs in four innings.  Marcell Ozuna and Matt Carpenter homered for St. Louis, which has lost five-of-six.  Austin Riley made his debut for the Braves and finished 4-for-7 in two games against St. Louis with a double, home run and two RBI.  The Cards are in Texas tonight to open a three-game set against the Rangers.  St. Louis sends Miles Mikolas to the mound against José Leclerc.

(Kansas City, MO)  —  The Royals ended their homestand with an embarrassing 16-1 loss to the Rangers and utility player Chris Owings pitching an inning and a third to close out the game.  Starter Homer Bailey did not make it through a five-run fifth to take the loss.  Owings gave up four runs and two of the five homers the Rangers hit.  Nicky Lopez had two doubles and two walks in defeat.  KC dropped four of six on the homestand.

(Cincinnati, OH)  —  Eugenio Suárez drilled two RBI singles in the Reds 4-2 win over the Cubs in Cincinnati.  José Quintana gave up three-runs on six hits in five innings for the loss.  Willson Contreras accounted for Chicago’s offense with a two-run double in the first.  With the loss, the Cubs’ run of eight consecutive series victories came to an end.  Chicago opens a three-game road set against the Nationals tonight with Cole Hamels opposing Washington’s Max Scherzer.

(Philadelphia, PA)  —  Christian Yelich hit two of the Brewers’ four home runs in an 11-3 bashing of the Phillies in Philadelphia.  Yasmani Grandal had a three-run shot and drove in four and Mike Moustakas went 3-for-5 with a two-run homer for Milwaukee.  Zach Davies improved to 5-and-0 with the win.

(Seattle, WA)  —  C.J. Cron went four-for-five and drove in two while Byron Buxton drove in three as the Twins cruised past the Mariners 11-6.  Michael Pineda went seven innings and gave up just three runs.  Minnesota improved to 28-and-15.

(Cleveland, OH)  —  Jason Kipnis homered twice and drove in six as the Indians outslugged the Orioles 14-7 at Progressive Field.  Carlos Santana went 2-for-4 with three RBI as the Tribe overcame an early 5-1 deficit.  A.J. Cole earned the win in relief of starter Trevor Bauer.

(Detroit, MI)  —  The Tigers losing streak is up to four games after they were thrashed by the A’s 17-3 at Comerica Park.  Starter Spencer Turnbull got the loss, giving up six runs, one earned, on five hits while striking out six in four innings.  Detroit avoided a shut-out with Dawel Lugo’s three-run homer in the ninth inning.  The Tigers send Daniel Norris to the mound tonight against the A’s Frankie Montas.

(Chicago, IL)  —  Ryan Cordell had two RBI, including the game-winner with a suicide squeeze, as the White Sox beat Blue Jays 4-2 at Guaranteed Rate Field.  Dylan Covey and three relievers tossed a combined two-hitter in the win.  Alex Colomé notched his ninth save of the season.  The series continues tonight with Iván Nova opposing Toronto’s Aaron Sanchez.