The Missouri House Majority Leader’s office says the heartbeat abortion bill that has attracted national media attention is not expected to be debated in the House until Friday. 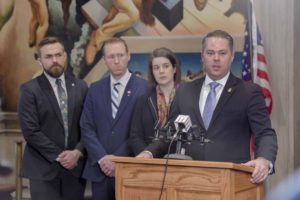 The Missouri Senate voted early this morning to approve a bill that would ban abortions once a fetal heartbeat is detected. The Senate vote came after about 15 hours of filibustering and negotiations.

The bill includes exceptions for medical emergencies, but not for rape or incest cases.

“They removed the ban on fetal tissue trafficking. Right now, I’ve become very convinced for a number of reasons, that there is active trafficking of aborted fetal tissue from the abortion clinic on Forest Park Avenue in St. Louis to Washington University School of Medicine,” Onder said.

The House approved HB 126 in February by a 117-39 vote, with three Democratic lawmakers voting for the bill. They were State Reps. Steve Butz, D-St. Louis, Joe Runions, D-Grandview, and Rory Rowland, D-Independence.

The legislation, which is sponsored in the House by State Rep. Nick Schroer, R-O’Fallon, would prohibit selective abortions due to sex, race or diagnosis of Down Syndrome.

Opponents include State Rep. Deb Lavander, D-Kirkwood, who has said that lawmakers should be focusing instead on Missouri’s high maternal mortality rate.