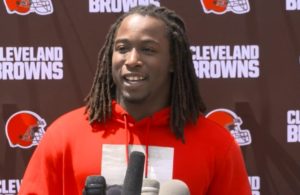 Cleveland Browns quarterback Baker Mayfield said he had discussions with Kansas City Chiefs quarterback Patrick Mahomes and tight end Travis Kelce.  Both players spoke highly of new Browns running back Kareem Hunt, who was cut from Kansas City in December after a video from February of 2018 surfaced of him pushing and knocking down a female acquaintance in a Cleveland hotel.

On Wednesday following, OTAs for the Browns, Hunt met with the media after signing with former GM John Dorsey and the Browns.  Hunt is allowed to work out now but will serve an eight-game suspension before he is even considered for reinstatement in the NFL.  Hunt has made promises to Dorsey, his new teammates, family and himself on what we saw on that video will never happen again.  Hunt is meeting with a therapist twice a week. He’s reaching out to high school students sharing advice — something he said he never had as a teenager. He’s also making a re-commitment to his faith.

Hunt responds when asked what he thinks Mahomes and Kelce would have told Mayfield.

Hunt on his conversations with Browns GM Dorsey