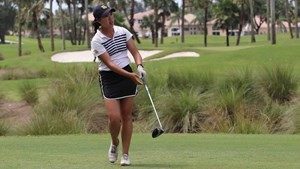 Shi Qing Ong was 3-over-par in round one at the NCAA Division II Women’s Golf National Championships to tie for 17th at the PGA National – Champion Course.

Ong finished day one on Tuesday just two strokes out of the top-10 with 15 holes of even-par, two double-bogeys and one birdie. She was knotted with 10 other competitors all at 3-over. Cal State San Marcos’s Claire Hogle led the field with a 4-under. Behind her were four competitors at 2-under. The rest of the field was even-par or over.

Shi Qing was 2-over after the front nine, posting eight even-par holes and a double-bogey on No. 14. She started her back nine with a birdie on No. 1, but followed that with a double-bogey before closing out the first round with seven straight pars.

Ong will tee off for round two on Wednesday morning from the PGA National – Champion Course.

Previous Post: « Missouri Senate deadlock is over with deal reached on GM bill
Next Post: UMSL and UCM women struggle in opening round of NCAA golf championships »