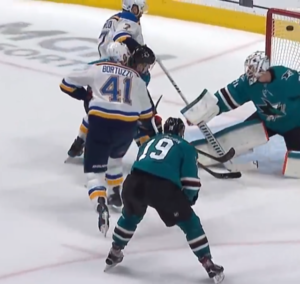 (San Jose, CA)  —  Robert Bortuzzo scored the tiebreaking goal late in the second period for the Blues in a 4-2 win against the Sharks in Game Two of the Western Conference finals in San Jose.  The series is now tied at one.  Jaden Schwartz, Vince Dunn and Oskar Sundqvist also lit the lamp and Jordan Binnington made 24 saves for the Blues, who are 6-and-2 on the road this postseason.

Logan Couture scored both goals for the Sharks in defeat.  Martin Jones allowed four goals on 25 shots for San Jose.  Couture got the Sharks to within 2-1 on a shorthanded breakaway when he deflected a pass from Alex Pietrangelo at the blue line and raced past the Blues Captain, beat Binnington on the other end.

Couture then scored his NHL leading 13th goal of the playoffs when he received a stretch pass, again getting by Pietrangelo and beating Binnington.