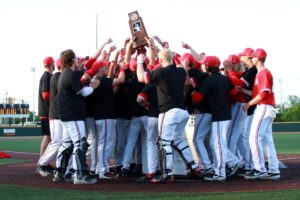 Central Missouri earns the association’s automatic bid to the NCAA Championship on Thursday, May 16 through Saturday, May 18.

No. 1 Central Missouri 5, No. 2 Missouri Southern 4
A walk-off single from Mason Janvrin lifted Central Missouri past Missouri Southern and into the MIAA championship game for the second consecutive year. Janvrin drove in Zak Whalin whose RBI double scored the game-tying run at 4-4. Prior to the UCM rally, MSSU took the lead on a bases-loaded walk. The Mules were led by Harrison Schnurbusch who went 3-for-4 at the plate and Erik Webb’s two RBIs. The Lions smashed three home runs in the game. The two teams combined 23 for strikeouts over nine innings.

No. 1 Central Missouri 10, No. 3 Central Oklahoma 2
Two runs in the fifth inning and four runs in the sixth inning propelled Central Missouri to the program’s 23 MIAA Tournament Championship. The Mules scored a pair of runs in the second inning to take a 2-1 before adding another run in the fourth. The Bronchos took the game’s first lead when TJ Black capitalized on a throwing error by the Mules. Central Missouri starter Chase Pymell went five innings and allowed just one earned run before handing the ball Collin Jones who earned a four-inning save. Central Oklahoma was led by Taylor Avila who hit a solo home run in the bottom of the fourth.

For the third time in head coach Bryce Darnell’s career, the Missouri Southern baseball team has qualified for the NCAA Baseball Tournament as the Lions will head to Warrensburg to take on Central Missouri in the opening round this Thursday, May 16.  Drury is in the NCAA-II baseball tournament for the sixth time in their 13-year team history after receiving an at-large bid on Sunday night.

The Panthers are 30-23 and seeded seventh in the Midwest Regional. Drury will play second-seeded Illinois Springfield (37-15-1) on Thursday in the opening round of a four-team, double-elimination tournament that is one of two such brackets that make up the Midwest Regional. Illinois Springfield, ranked 19th in the latest NCAA-II national poll, is the host of the sub-regional tournament with games to be played at Robin Roberts Stadium in Springfield, Illinois. Drury’s game time in the opening round will be either 3:30 pm or 7 pm.

Previous Post: « #BillPollockShow — Is Martinez more of a liability or an asset to the @Cardinals (PODCAST)
Next Post: 13th straight year Mizzou softball makes an NCAA regional »