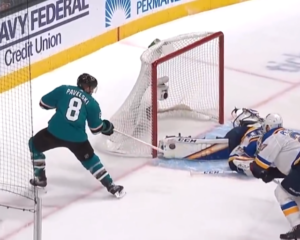 Logan Couture sparked San Jose started in the opener of the Western Conference final against St. Louis by scoring their first and last goals in a 6-3 final on Saturday.  On Monday night, the Blues will look to slow down Couture and the Sharks in Game Two.

”Logan Couture, if he’s not the top two-way center in the league, he’s in that conversation,” coach Peter DeBoer said.   Couture added an assist as well and has 45 goals in the playoffs, second most in the NHL to Alex Ovechkin’s 50 for current players. He leads the NHL with 11 goals and 17 points this postseason.

The Blues’ Jaden Schwartz has been a pleasant surprise with eight goals and 12 points this postseason, Vladimir Tarasenko, who led the team with 33 goals in the regular season, had an assist on St Louis’ first goal, but managed just one shot on goal and and was on the ice for four of San Jose’s
goals.

Four of Vlady’s five postseason goals have come on the powerplay and Interim Coach Craig Berube needs to see more from his top goal scorer in five-on-five situations.

David Perron feels the Blues played well in spots from all four lines, but couldn’t do it consistently shift-to-shift.

Pat Maroon would like to see St. Louis carry over their play from late in the second into the third.  He said that was more symbolic of the way they’ve played this postseason.

Game time is scheduled for 8 p.m.