Keselowski picked up his third win of the year, moving to the point with six laps left, then held it for an overtime restart and finished two-tenths of a second ahead of Alex Bowman.  Bowman goes into the NASCAR record books as the only driver yet to win a NASCAR race who has three straight second-place finish.

Kyle Busch, trying to set a record with his twelfth straight top-ten finish at the start of a season, finished thirtieth.  He was in the top ten before getting a pit road penalty and then losing a tire in a late-race bump with another car.

The win is Keselowki’s third of the year, tying Busch, the thirtieth of his career. 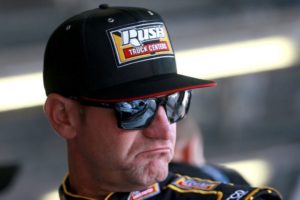 Clint Bowyer ran strongly all day and finished fifth after his strong move for the lead on the first overtime lap was blocked by Erik Jones.  “We should have finished second,” he said afterward. “I had a huge run…but that kid, I guess he was willing to wreck himself to hold the position.” Jones held onto third, ahead of Chase Elliott. Bowyer had some words after the race with Jones, who was still in his car. Jones said the incident was “just racing…I’m not going to give up that lane and give up two, three, four spots.”

NASCAR heads to its annual all-star race next weekend at Charlotte, a non-points race. The longest race in the series will be Memorial Day night, a 600-miler, also at Charlotte.

(INDYCAR)—-The IndyCar regenmeister for now is Frenchman Simon Pagenaud, winner of the IndyCar Grant Prix on the road course at Indianapolis. Pagenaud overhauled leader Scott Dixon, mastering a rainy course, with two laps left and won by more than two seconds.  He was running third, 6.3 seconds behind Dixon and behind Jack Harvey.  He was sixth with 18 laps left, third with ten laps to go, second with five left, and in the lead two laps before the end.

Dixon’s runner up finish was the third second-place finish in the Indianapolis GP in three years, his 43rd finish as runner-up, making him the runner-up in runner-up finishes to Mario Andretti, who was a bridesmaid in 56 races.

Practice begins Tuesday for the Indianapolis 500.  Qualifications will be next weekend with the race on the 26th.

(FORMULA )—Another Formula 1 Grand Prix.  Another 1-2 finish for Mercedes.  Lewis Hamilton first, Valtteri Bottas second. Fifth time this year Mercedes goes 1-2. The win moves Hamilton ahead ot Bottas in the championship points.  Bottas started from the pole but was second after the first turn and finished four seconds behind Hamilton.

Both cars from the American Haas Racing team were in the top ten at the end, a rarity in the three years Haas has been competing in F1.  Kevin Magnussen was seventh and Ramon Grosjean came home tenth.

Previous Post: « Mizzou baseball falls at Vandy
Next Post: What to watch for in this final week of the Missouri Legislature’s session »