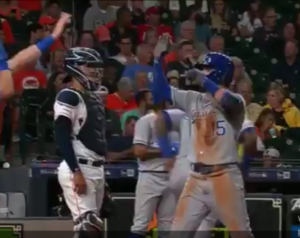 (Houston, TX)  —  Ryan O’Hearn and Whit Merrifield each hit a grand slam as the Royals routed the Astros 12-2 in Houston.  Merrifield finished 4-for-5 with five RBI as Kansas City picked up just its fifth road win in 18 tries this season.  Danny Duffy hurled six-and-two-thirds innings of two-run ball for his first win of the season.  Collin McHugh was rocked for eight runs in three innings to take the loss for Houston.  Alex Bregman homered and George Springer singled in a run for the Astros, who had their three-game winning streak snapped.

(St. Louis, MO)  —  Bryce Harper hit a grand slam as the Phillies hammered the Cardinals 11-1 in St. Louis.  Rhys Hoskins also went yard for Philadelphia.  Aaron Nola lasted six innings and gave up just three hits and one run for the Phillies, who have won seven of their last 10.  Dakota Hudson gave up eight runs over five frames, but just two earned, to take the loss for the Cardinals.  Matt Wieters hit a solo homer in the sixth to account for the lone St. Louis run.  The Cards have dropped five of their last six.

(Chicago, IL)  —  Kris Bryant blasted a three-run homer in the bottom of the ninth inning to lift the Cubs past the Marlins 5-2 at Wrigley Field.  Albert Almora Jr. hit a solo shot in the third to tie the game at two for the Cubs, who have won eight of their last nine.  Steve Cishek got credit for the win after a scoreless top of the ninth.  Martin Prado and Jorge Alfaro plated runs for the Fish, who have dropped eight-of-10.  Adam Conley suffered the loss.

>>Brewers Storm Past Nationals In Shut Out Victory

(Milwaukee, WI)  —  Lorenzo Cain’s three-run double with two outs in the seventh inning broke a scoreless tie that led the Brewers to a 6-0 victory over the Nationals in Wisconsin.  Mike Moustakas, Ben Gamel and Jesus Aguilar also plated runs as Milwaukee won its fifth straight win.  Freddy Peralta pitched five scoreless innings for the victory.  Stephen Strasburg allowed four runs on six hits while pitching into the seventh inning for Washington in the loss.  The Nationals combined for a total of five hits in their third straight loss.

(Pittsburgh, PA)  —  Gregory Polanco’s two-run homer in the fifth inning held up as the Pirates held off the Rangers 5-4 in Pittsburgh.  Melky Cabrera had a pinch-hit, two-run double in the fourth for the Bucs, who have won three in-a-row and five of their last six games.  Michael Feliz picked up the win and Felipe Vazquez earned his 10th save.  Hunter Pence hit a two-run homer in the fourth and added a two-run double in the seventh to pull Texas within one.  Adrian Sampson fell to 0-and-2 with the loss.

(Toronto, Ontario)  —  Jose Berrios fired seven scoreless innings as the Twins shut out the Blue Jays for the second straight night with a 3-0 win in Toronto.  Berrios allowed just four hits to move to 6-and-1 with the win.  Taylor Rogers gave up two hits in the ninth, but held on for his fourth save.  Marwin Gonzalez walked with the bases loaded in the first inning and Mitch Garver hit a two-run homer in the sixth for Minnesota, which is 9-and-3 in its last 12 games.  Aaron Sanchez surrendered all three runs in seven frames to take the loss.  The Jays were shut out 8-0 on Monday.

(Cleveland, OH)  —  Lucas Giolito and two relievers combined on a five-hitter as the White Sox shut out the Indians 2-0 in Cleveland.  Giolito struck out eight while allowing three hits and three walks en route to his third win.  Alex Colome got the final four outs for his seventh save as Chicago won its second straight.  Yoan Moncada and James McCann each had an RBI single to supply the offense.  Jefry Rodriguez took the loss despite allowing just two runs in six frames.  Francisco Lindor had three of the five hits for the Tribe, which lost its third straight.